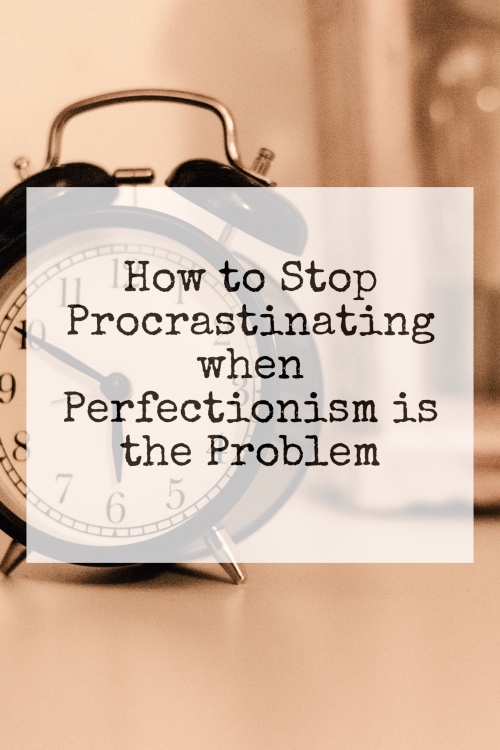 In school (which seems like forever ago now) I was one of those students who could write an essay the morning it was due and still get a A.

Growing up I had no consequences for not doing chores daily, there was no allowance and no punishment. Over time I developed a habit of only doing them once a week, putting them off until I wanted something.

These things highly reinforced my tendency to procrastinate. I had a belief that I worked well under pressure.

In my adult life, I have uncovered a new truth of the matter: I procrastinate out of perfectionism. If I’m not going to do it perfectly, I’m just going to wait until I’m ready to do it. Then the timer runs out and perfectionism goes out the window and getting the task done is all that’s important.

Waiting until the last minute means overcoming perfectionism out of necessity, rather than choice.

I’ve always been great at planning. I love planning projects. I’ve planned my home renovation, my garden lay out, my monthly meal plan, our weekly budget and I write extensive packing lists. My follow through, however, is often lacking.

When I used to work as an hourly manager in retail, my boss had a saying, which I heard often:

In other words, you can make all the elaborate plans you want, but if you don’t actual DO them, they don’t really matter all that much.

Recognizing the problem is half the battle.

My struggle with decision anxiety has played a role in this form of procrastinating. I find it so difficult to make a decision, so it gets put off until I have no more time to think about it. Either I panic and make a choice or someone else chooses for me.

So many years I’ve planned to have a garden, and for so many reasons I’ve always failed. But perfectionism has caused me to set myself up for failure before I’ve ever started on a number of occasions.

It would usually look like this: I’d write a list of all the veggies I want in my garden, I’d research which make good companions for one another, I’d decide how many plants of each to have, I’d plant my seeds (exactly enough), some wouldn’t grow, some would grow a lot, I’d readjust my plans for what grew, I’d visit my garden patch to check out my spacing, it wouldn’t look right so I’d start all over, I’d transplant what was left of my seeds and try to keep them alive.

Often I never reached the end of this plan. Somewhere along the line I’d get tired of all the planning and stop with all the doing.

I’ve killed a lot of plants in my lifetime.

Last year we bought a house with 2 acres of land and I was given 10 months to decide where I wanted my garden. In those 10 months I changed my mind nearly every time I was asked where my husband should put the fence or where my dad should till the land with his tractor.

One day in March my dad came out unannounced with the till behind his tractor and I had to make a final decision. I had to tell him where I wanted him to till and how big of a patch I wanted.

As I anxiously weighed the pros and cons of two promising garden placements, my dad’s advice comforted me.

“Well, you’ve got good sun here and you can always make it bigger later.”

My dad isn’t a very outspoken person, what he was telling me in this statement was that he was done waiting on my indecisiveness, and I needed to just start.

The sun was the same for both places. I was struggling to decide if I wanted the garden in front of the red wood tree or beside it. It really didn’t matter which spot I chose, which made it even more difficult of a decision.

I saw them that my perfectionism was my problem. I kept this in mind as I began planting: “Just start. It doesn’t have to be perfect.”

As I dug my second hole for a tomato plant, I thought “What’s so bad about crooked lines? Nature doesn’t grow in perfect lines.”

With my third hole I realized “Perfect spacing is a man made construct. In nature these plants would never grow with exact spacing between every plant.”

After the last plant was in the ground I looked out at my hard work. I knew lines weren’t straight and spacing wasn’t even. Perfection is impossible, but it looked GOOD.

I still have more plants that need added to the garden, and a past version of me would have cringed at the thought of different aged plants growing in the same lines. I had to realize that my garden will never be perfect, some plants will thrive and grow taller than others, some will die and leave gaps. This is nature.

My garden will never be perfect, but it can still be fruitful, and so can we.

How Can We Overcome Perfectionism

1. Realize perfection is not natural.

A tree does not grow in perfect symmetry, but it’s roots are still strong and it’s branches are still balanced.

2. Realize perfection is not necessary.

The tree does not need a clear path to grow. The roots wrap around the obstacles, it uses the rocks and hard places as anchors. The bigger the boulder, the better the anchor, and the more difficult it is to uproot that tree.

3. Realize perfection is not moving you forward.

If the tree waited for the boulders to move out of the way, if it waited for a clear and easy path, it would never grow. The challenges aren’t going anywhere, make sure that YOU are and keep moving forward.

4. Realize perfection is not good for you.

Imagine if a tree tried to grow in soft, easy dirt. The roots wouldn’t be very strong, because they wouldn’t have to be. The tree wouldn’t be very tall and mighty, because it would fall over in that soft soil. The foundation wouldn’t give the roots anything to hold onto, they would have anything sturdy to ground themselves to, they’d have no anchor.

How weak would you be if you’d never faced a challenge in your life?